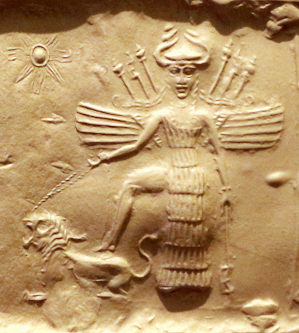 Inanna, Goddess of Heaven and Earth Who Descended Into Hell for God-Knows-What Reason

Wilson’s Introduction to the 1989 Edition

Dante based his famous beginning around the Biblical idea that the lifetime of humanity is 75 years. Having been born during the Middle Ages, Dante was lucky to reach his late fifties. Dante’s line is much more famous than his actual biography and as it prefaces the introduction to a book about symbolism, his poetic fallacy can be forgiven.

By 1989, and at this point established with New Falcon Press, Wilson was done with whatever opacity of purpose he had adopted for the earlier Playboy Press editions. The first part of his introduction makes it very clear that this is a book about magic, subversion and myth. I had actually read Wolkstein’s Inanna, Queen of Heaven and Earth  before I picked up Ishtar Rising which was at the time out of print and somewhat expensive. Alan Moore incorporates the Ishtar/Inanna myth into one of the best issues of his Promethea series, and while Moore is obviously erudite enough to have been exposed to the Ishtar myth long before reading Wilson, this reader can’t help but suggest that Wilson’s repetitive mentions of the myth had something to do with Moore believing it to have been such an important magical allegory.

As such, Wilson begins his introduction with an explanation of why this story resonated so deeply within him as emphatically as he ever writes elsewhere. (The raw self-reflection that Wilson demonstrates in this chapter, coupled with his usual elan, makes me firmly believe that this piece of writing is a “true” Robert Anton Wilson.) The Underground Journey, he points out, is present in almost all of his work; his characters are repeatedly made to spend seasons in Hell to better understand themselves and the world. By the end of the first part of his introduction his earnestness and passion remind me of his wonderful poem, “Lawrence Talbot Suite:”

My werewolf heart is pierced at last

By the silver bullet of the Lady’s gaze

I am the Beast the Lady rides
I am the stars that are in her hair.

(Versions of the poem can be found in The Illuminati Papers and Masks of the Illuminati.)

The second part of the introduction provides a solid foundational theory to the magic alluded to in part one by building upon Welles’ F for Fake. Wilson would later expand on the analysis presented here in Cosmic Trigger II (I believe, it could have been CT III) in what may be one of the most interesting writings on film that I’ve ever read. The earlier version here is just as satisfying, if not more compact. Luckily F for Fake is no longer as obscure as it was when Wilson was writing in the late Eighties. It’s been released by the Criterion Collection and is one of the few Welles films I’ve watched multiple times. (It’s a great film to watch when you’re lonely as it feels, at least to me, like one big, fucked-up party.)

Wilson writes with more flair in these few pages about F for Fake and Welles in general than I could ever hope to. I don’t have much to add aside from how fascinating the film and its subject matter really is; Clifford Irving’s career is as bizarre as anyone could ask for and he managed to draw in two of the biggest enigmas of the twentieth century- one famous, one made famous by Welles’ film. Howard Hughes was a hugely consequential kook who will reappear in this narrative as the patron, and possible exploiter, of Jayne Mansfield’s formidable bosoms. El Mir, after my repeat sessions with Fake, might be my favorite artist of the 20th Century- I would love to have one of his Modiglianis. The theory of art presented in the second part of the introduction (which is very much in line with the movements of cubism, Dada and surrealism that Wilson uses to buttress Welles’ film and philosophy) is perhaps the grand artistic tradition of the twentieth. Wilson’s mastery of art theory is as impressive as any of his intellectual accomplishments and shouldn’t be understated. Wilson, being Wilson, also draws in Joyce and Crowley to augment his overview of Art. (The joke of Crowley’s is beloved by me not only because of its original appearance in Magick in Theory and Practice but its appearance in Wilson and Moore’s works.)

It is surprising to me that Wilson didn’t receive any messages from magicians or truth-seekers on account of Ishtar Rising. In fact, I would hold up Wilson’s earliest titles, namely The Sex Magicians, Sex, Drugs and Magick, and The Book of the Breast/Ishtar Rising as books that still drip with magic. Wilson also does a little of the work of later interlocutors by acknowledging his bitterness against the “Women’s Lib” Movement at the time of the original authorship. He notes himself that the book was written during a time when “everyone was a little nuts” and that his views had changed by the time the New Falcon edition was published. But he notes, like other commentators, that his writing was a product of its times and opts to keep most of his original work intact. In an act of Wilsonian wit and irony, our Man uses Christ’s call to his Father as an end to his introduction to a work on the Female Godhead.

I think we’ll reserve his 1973 Introduction for next week as there’s plenty to unpack there as well. I am looking forward to what everyone has to say! 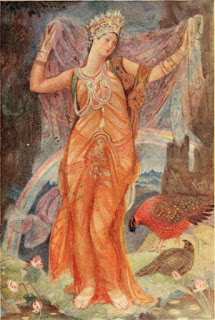