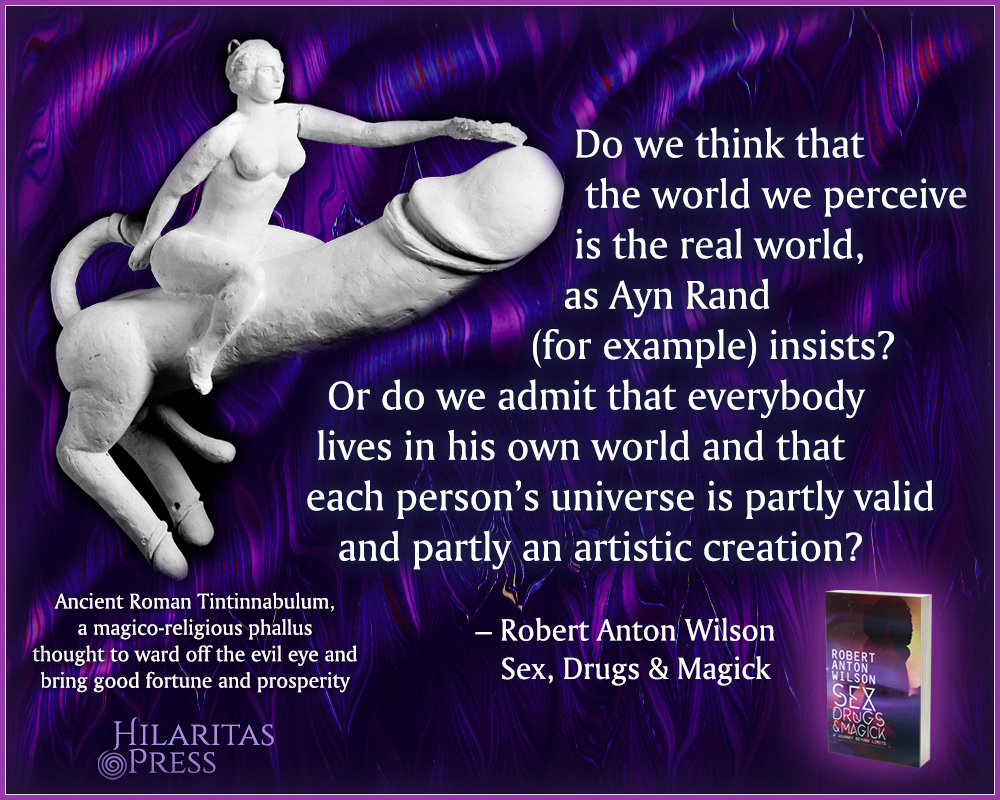 Skimming over RAW's occasionally humorous glossary, a part of the book that would have meant a lot more before the rise of the Internet, we arrive at the four afterwords that bookend Wilson's study. The amount of forewords and afterwords attached to this volume show how impactful it has been in many students of Wilson's lives. I won't say as much about these afterwords as I have said about Wilson's writings, some deal with the present and the future and I have no intention of arguing with living magicians. After all, they could be right and I could be wrong.

Rodney Orpheus, in his "Our Holy Trinity," gives us a solid foundation in the why of the title of the book; why do these three things seem to go so well together and why are they so reviled? I must admit, the first time I saw the title of this book, in the back of another Wilson volume, it seemed particularly brazen. The subtitle didn't help. I was also a teenager and still very conscious of what my books were titled, as my parents could see them at any time. I still remember my mother's heartfelt sigh when she saw me earnestly studying Lon Milo Duquette's Enochian Sex Magick. It was a sigh of bitter acceptance, I think we could look back on it now and laugh- but I won't be brining it up at Thanksgiving. Orpheus points out that "undue" interest in sex, drugs and magic all keep us from being normal. Normalcy being the desired state of a populace by its rulers, those of us who purposefully discover things outside their purview become the enemy. The things we love and revere become filth.

But, Orpheus points out that sex, drugs and magic are winning. My own writings here have shown my qualms with this assessment, but the trend is still towards greater personal freedom, in some ways and for the moment.

Andrew O'Neill's "Global Agnosticism" explores the changes that are afoot and the role that Wilson played in the past. O'Neill's survey of the changing attitudes towards gender, sex and relationships is combined with the widespread interest in the occult as well as the greater acceptance of hemp-derived CBD and psychedelic therapy. O'Neill wisely points out that our internet, particularly social media, doesn't fulfill the role of an open source of information because of "the algorithm" and that we must still strive to question every idea to truly become wise. O'Neill also acknowledged the pushback that has come from the spread of sex, drugs and magic and succinctly compares it to the phrase "I can remember when this was all just fields," which somehow encapsulates the sad, stodgy nature of the naysayers. (Our author also made me guffaw when they pointed out that those of us who shake our heads at the rise of "Instagram witches" might welcome a resurgence of the witch-hunts.)

Most importantly, O'Neill praises Wilson and acknowledges that he would have still been trying to grow and accustom himself to the world if he were still alive. This has always been my personal belief, that someone, one of the closest that we had to a saint during our lifetimes, of his stature would not have simply calcified into wherever he was at the time of his passing. The world has changed a lot since the Old Man's Greater Feast- perhaps naively, I hope I get to hear what he thinks of everything that has happened.

In "The Alchemical Mystery of Prima Materia," Alexis Mincolla gives us another explanation of the opposition towards sex, drugs and magic and then aligns our three concepts with the three alchemical principles. Mincolla's essay neatly aligns salt (the body) to sex, mercury (the mind) to drugs and sulfur (the soul) to magic. Mincolla points out that this trinitarian model is easily applied to many principles, but makes a convincing argument that his present interpretation fits particularly well. Alchemy is essentially concerned with transformation and Mincolla outlines how each element of our title are tools for transformation. Like Orpheus, Mincolla states that personal transformation isn't in the interest of the powers that be, hence their calumnies against its avenues.

Mincolla does state that most people aren't going to question you if your trying to turn a buck- hence alchemists would claim they were simply trying to turn base matter into gold. However, I should point out that many alchemists were reviled. And that the manners that people have tried to make money off of sex, drugs and magic have been suppressed and are still sources of scorn: prostitution along with non-government sanctioned drug dealing are two of the most hated professions in the world. I would also probably laugh, in a bitter grapes kinda way, at someone trying to make a living simply by being a magician. That said, the idea of owning a metaphysical book shop, however niche, appeals to me more and more every day I go into my current job.

Finally the book closes with a delightfully inspiring and inspired essay by Arden Leigh, "Seven Guidelines For the Intrepid Adventurer Pursuing the Expansion of Consciousness Through the Practices of Sex, Drugs, and Magick." The essay won me over by the line closing with "...eyes aglow and bellowing divine gibberish." Leigh's afterword, the longest of the four, is a brilliant, very human communication about the trials, tribulations and joys of consciousness expansion. Perhaps it is her former occupation as a pickup artist, which she directly alludes to a couple times, that account for her brilliant and intimate communication skills. I was not expecting this kind of dialogue at the end of the book, but I deeply appreciate its presence.

I fully endorse the advice given and reading it has made me reexamine some of my attitudes, post-conceptions and conceits I've accrued over the years. I especially appreciated Leigh's wise words of caution about the relationships we form on these journeys and how to discern which ones are right and which are a waste of energy. Her description of the workings of magic is moving and, in my experience, accurate. What a lovely coda.

Thus begins the end of our discussion of the Hilaritas edition of Sex, Drugs & Magick: A Journey Beyond Limits. I'll see you out there, and hopefully our paths will continue to cross on our journeys.

- Remember that Tom's Natural Law reading group will be starting up this month. My copy arrived and it does look like an excellent volume. It should be an interesting time.

- I don't know what we'll be doing here. Eric said he's thinking about reading Balzac's History of the Thirteen. I haven't read that before, but I did know someone who was fond of the novel(s).

- I've recently finished Alan Moore's Illuminations and Phil Baker's City of the Beast: The London Of Aleister Crowley, both of which I intend to review soon as I think they'd be of interest for our little group. I also received Higgs' soon to be out of print novels which I might write down some thoughts about.

- It occurs to me that Andrew O'Neill is a sort of magical older sibling or cousin to me. I respect their words all the more after watching some of their stand up routine. (As my most important magical partner, before my wife, informed me: "performance" is the essence of magic.)

Sex, Drugs & Magick: Afterwords To The 2021 Edition Skimming over RAW's occasionally humorous glossary, a part of the book that woul...